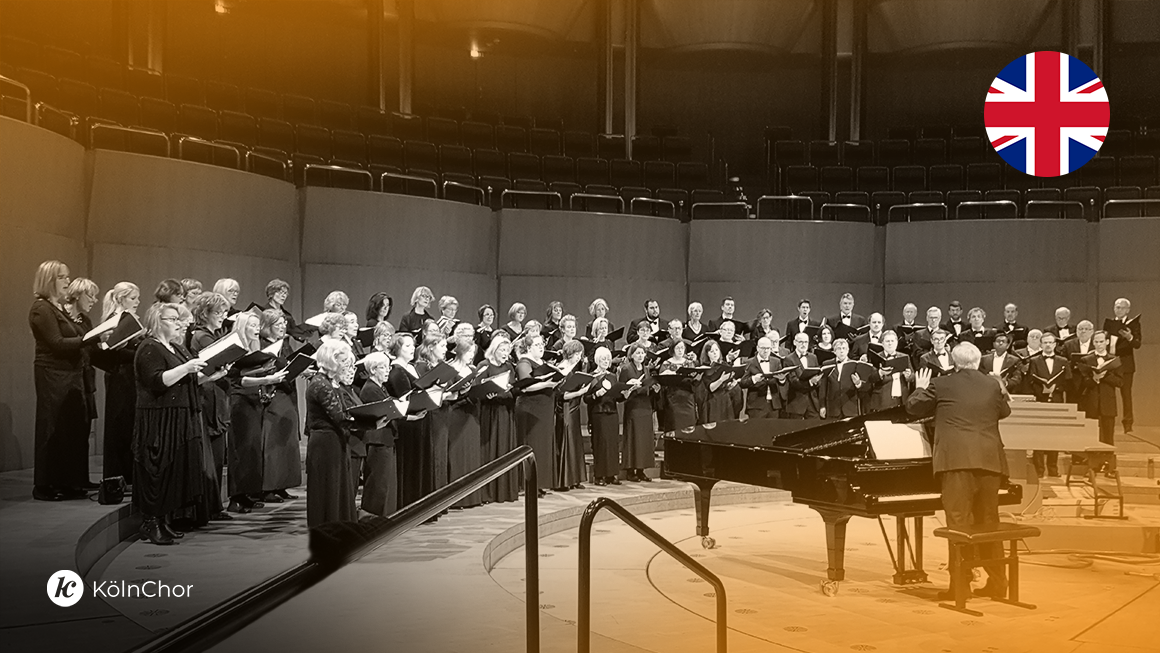 As one of the largest concert choirs in the Cologne-Bonn area, the KölnChor with its 110 active singers has successfully asserted itself in the professional music business since its foundation in 2002.

The work of the KölnChor rests on two pillars

The regular weekly rehearsals, the results of which are presented in concerts in the Cologne-Bonn area as well as on concert tours, and on the implementation of choir projects, which are limited in time and to which singers with good voices are cordially invited as guests.

Highlights and concert tours - a selection

Outstanding was the invitation of the choir to a nearly 14-day concert tour to Volgograd, Cologne's twin city in Russia. On the occasion of the sixtieth anniversary of the end of the Second World War, the KölnChor undertook a concert tour to France in May 2005. In November 2005, the KölnChor and the Rheinische Kammerchor Köln sang in front of an audience of around 12,000 in the KölnArena at the "Classical Spectacular" at the invitation of the Royal Philharmonic Orchestra London.
Another new step in the choir's career was its participation in the "Lord of the Rings Symphony" at the KölnArena on 28 May 2006, a symphonic journey through the fantastic world of Tolkien's novel trilogy.

After the Cologne premiere of Paul McCartney's oratorio "Ecce Cor Meum", a trip to Latvia was followed by the first performance in the Baltic States, including at the Riga Cathedral.

In 2011 the KölnChor will give the Russian premiere of McCartney's oratorio in St. Petersburg under the baton of the Russian conductor Edvard Serov, with whom the choir has maintained friendly relations for many years. After the death of Edvard Serov, his son Yuri took over his musical heritage
A performance of this exciting work took place in 2012 in Kaunas, Lithuania. A great honour and appreciation was bestowed upon our choir when it was invited to accompany the highly emotional concert of Anna Netrebko and Erwin Schrott in 2011 in the Kölner Philharmonie.
In June 2013, the KölnChor was accompanying choir at the concert with Andrea Boccelli and David Garrett in the Lanxess-Arena.

At the invitation of the city of Novgorod in Russia, the KölnChor performed the Paul McCartney's oratorio "Ecce Cor Meum" in cooperation with the Philharmonic Choir of Nuremberg, with whom a long-standing friendship is maintained and went on a concert tour on the Whitsun weekend of 2014.
In the same choral combination, there was a classical open air concert in Nuremberg with 60,000 guests under the motto "Freedom" in August 2016 for a "Picnic in the Park" on the Luitpoldhain. Alexander Shelley conducted the Nuremberg Symphony Orchestra. For the grand finale, the Nuremberg Philharmonic Choir and the KölnChor sang the last movement of Beethoven's Symphony No. 9 "Joy, beautiful spark of the gods".

In 2015, the performances of Bach's "St. Matthew Passion" together with the Rheinischer Kammerchor Köln and, at the beginning of this year, Mendelssohn's "Elijah", received great attention and much positive criticism. In October 2018, the KölnChor performed in Venice and other cities during a concert tour to Italy, and the choir again, performed with the star tenor Andrea Bocelli in Cologne's Lanxess Arena.
In the same year, in cooperation with the KölnChor, the European premiere of the music of the computer game "Final Fantasy XIV" took place in two highly acclaimed concerts in Dortmund's Konzerthaus.

The KölnChor regularly gives guest performances in the Kölner Philharmonie, in churches in the city of Cologne and the surrounding area, and in concert halls far beyond.
Qualified singers are warmly welcome to help shape the choir's next concerts. You can find more information here.

The KölnChor is a member of the "Netzwerk Kölner Chöre e.V." as well as the Association of German Concert Choirs (VDKC).